Numerous studies have shown that there are correlations found between brain function (or dysfunction) and behaviour. In order to fully understand these studies, it’s important to have a general understanding of some of the functions of important parts of the brain.

Here we can see how the brain has different “lobes”. In this course we will learn a lot about the frontal and prefrontal area (above the forehead).

One of the functions of the PFC is that it facilitates our decision making in the sense that it allows us to foresee and imagine possible implications for our actions. When the PFC is functioning normally it kind of acts like a “break” on our impulsive behaviour. So when you get really angry at your teacher and you want to curse but don’t because you know that it will get you in trouble, you have your frontal lobe to thank. Or if you’re walking down the street and you see a pretty person and you think, “wow! They’re hot!” and you keep that thought to yourself – you have your frontal lobe to thank. The impulsivity of young children can be explained through their still-developing frontal lobes. 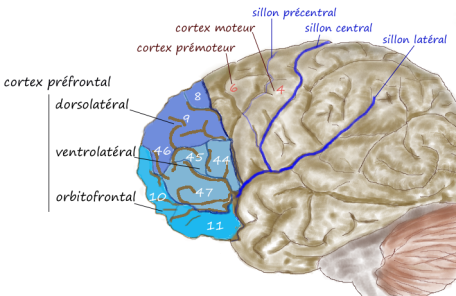 Here you can see that within the frontal lobe is the prefrontal cortex and within the cortex there are further sub-regions, like the ventrolateral PFC and the orbitofrontal PFC.

When learning about the brain, it’s always important to remember that brain function is complex and to avoid the allure of simplifying down to claims like “our frontal lobes control our behaviour.” Human behaviour is far too complex, as is the brain, for both to be boiled down to such a simple statement. A more accurate statement would be “our frontal lobes are associated with self-control.” The phrase “associated with” is a useful one when discussing the brain because it suggests a correlation between brain function and behaviour without oversimplifying the relationship.

How do we know what we know in psychology? Research.

One of the first and most famous studies of a man who had severe damage to his frontal lobe was that of Phineas Gage. Gage was a railroad worker who was putting dynamite into rocks while working with a team to lay tracks. As he used a six-foot bar to pound the dynamite powder into the rocks it ignited, essentially making the long steel pole a bullet that fired up through his left eye, through his skull and landed about 50ft away. Gage survived and was even conscious while he rode on the ox cart to the nearest town to get help. As a result of the incident, Gage’s behaviour seemed to change as he went from being a rather mild-mannered man to “no longer Gage” as his friends said. Reports have even said that he was no longer allowed to be around women because he would often say rude things to them. This was in 1948 and Harlow, the Doctor who treated Gage, made a few observations about the change in Gage’s behaviour that has made him one of the first and most famous cases that links brain damage to personality change. 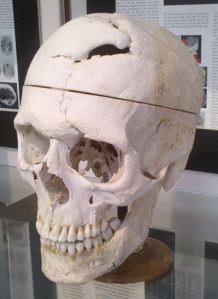 Gage’s skull. You can see the whole in the skull where the metal rod went through. image from wikipedia.

I’m only using Phineas Gage here as a pretty dramatic and gruesome example of how frontal lobe damage may influence our behaviour and our ability to regulate our impulsive desires; he is one of the first case studies in neuroscience. Since Gage there has been a lot more research into the frontal lobe, the area within the frontal lobe called the prefrontal cortex and their connection with regulating our impulsive decision making and our emotion. We’ll now look at some of these more recent findings.

With modern imaging technology (MRI’s, fMRI’s, PETs, etc.) researchers can investigate further connections between brain function and behaviour. You can read more about how and why these brain imaging machines are used later in this chapter.

Time and again research has shown that there are common brain functioning and activity differences in criminals when compared with healthy and normal controls. When researching these correlates, it’s important to remember their general function, but not to oversimplify the biological processes underpinning human behaviour.

Studies have shown that there is a correlation between low functioning frontal lobes and violent behaviour. You can do a quick google search under scholarly articles for yourself and see just how many studies are in this area. In fact, this is precisely what Brower and Price did in 2000: they wrote the journal article “Neuropsychiatry of frontal lobe dysfunction in violent and criminal behaviour: a critical review” in which they summarise studies between 1966 – 2000. This would be good optional extra reading.

Here’s an excerpt from Sapolsky’s lecture on the frontal lobe and the brain.